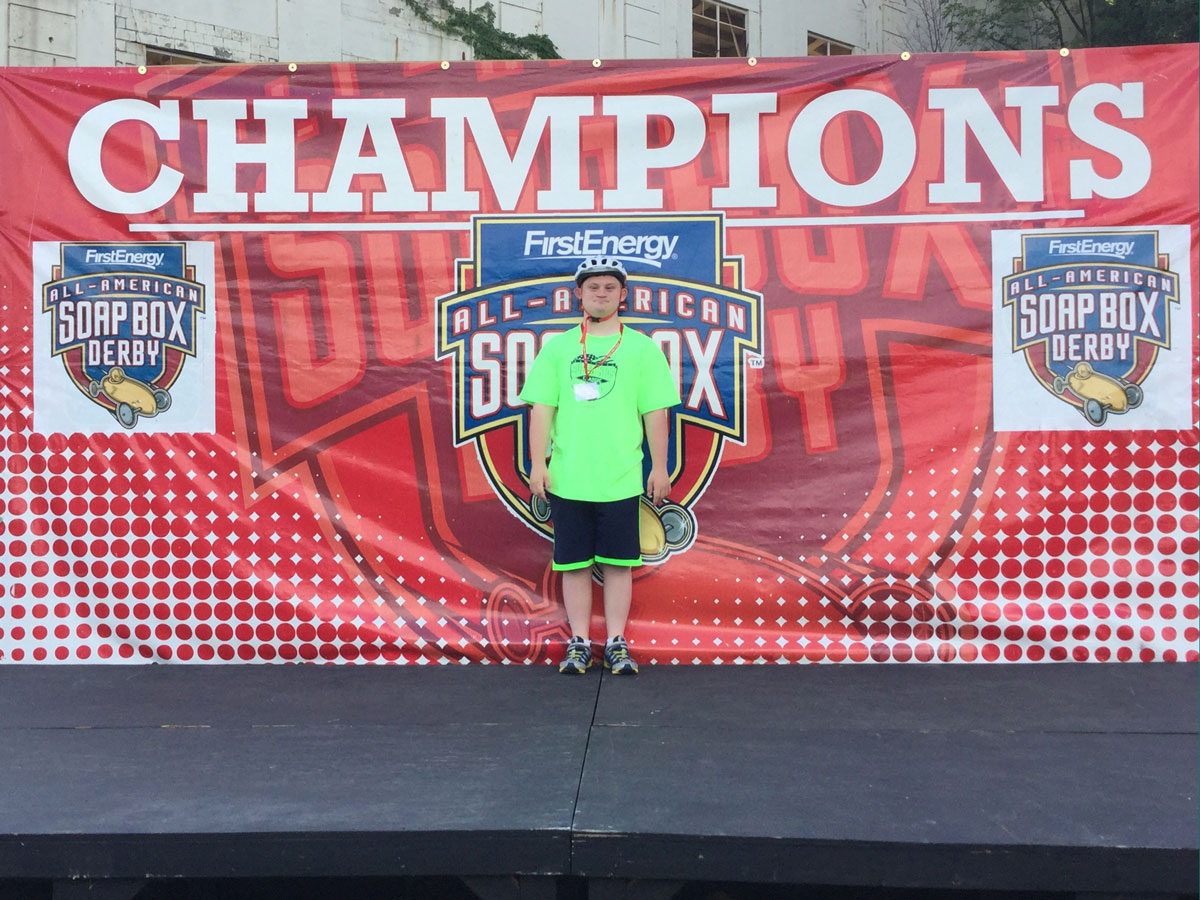 Pursuing his motto to “try everything,” Donnie Winton has done a lot, including racing down a huge hill at top speed in a car without an engine. Donnie, a 17-year-old with Down Syndrome, competes in the Super Kids division of the All American Soap Box Derby and absolutely loves it, according to his mom, Casey Winton. Individuals from about 7 to 21 years old can choose from one of three divisions of the All-American Soap Box Derby, build their own cars, and drive them during the competition. The Super Kids Classic allows kids with disabilities to compete. Local winners advance to the National Super Kids Championship, held annually in Akron, Ohio in conjunction with the FirstEnergy All-American Soap Box Derby® World Championship. In fact, it was the championship races in Ohio that inspired Matt Findley, who directs the local racing events, to implement the Super Kids division in the races held in Harrisonburg, Virginia. To Findley, the Super Kids division exemplifies the purpose of the Soap Box Derby— “to make the Soapbox Derby all inclusive, so anybody can race.” Special cars are built in the clamshell design, so that the top part of the car goes up, granting easier access if a person has a physical disability. Assistant drivers are also available, allowing kids to ride in the car and participate in the race, without having to drive the vehicle. Donnie has participated in the Super Kids division for approximately two years and is fearless when it comes to racing. He often waves to everyone as he passes them traveling down the race course. Rather than slowing him down, Donnie won the Super Kids division and qualified to compete in the National Super Kids Championship.
To Casey, one of the best things about the Soap Box Derby is found in the people that participate in the event. “The camaraderie behind this program is amazing. There was a lot of camaraderie with all of the other parents. He made a really good friend with someone who was from Louisiana. People came from Canada, Texas, all over the country. These kids came up to compete from all over for the Super Kids Soap Box Derby.”

When he isn’t speeding down hills, Donnie also takes part in numerous sports through Overcoming Barriers, a wellness program designed to empower individuals with disabilities, parents, educators/instructors, and community organizations. He has been participating in the program since the very beginning and “is one of the reasons that the whole Overcoming Barriers program started,” according to Director Dr. Tom Moran of James Madison University. From its various programs and activities, Casey says, “Donnie learns not to just do [the activity], but how it is supposed to be done. To the best of one’s ability correctly.”

Sponsored by local businesses, active families, and the Rockingham Rotary Club, the next Local Race of the Soap Box Derby, including the Super Kids division, will be held in Harrisonburg, Virginia on Saturday, May 11, 2019. Donnie plans to participate and hopes to qualify again for the National Super Kids Championship in July 2019. In the meantime, he doesn’t plan to let anything get in his way as he goes after what he wants in his efforts to “try everything.” Looking for ideas about how to make your program(s) more inclusive?

Is there something going on in the Shenandoah Valley that we should have on our calendar? Click the button to let us know!